I thought I would do an educational post about smoothing out the already pretty good trigger on a Smith & Wesson revolver. I haven't done it to this 442 yet so this was a great opportunity. Sorry the photos are out if order. The application I used to do this was squirrelly.

Let me begin by clearly stating that I AM NOT A GUNSMITH, AND IF YOU DECIDE TO DO THIS, YOU ASSUME ALL RISK ASSOCIATED WITH THE PROCEDURE. ALSO, DO NOT ATTEMPT THIS IF YOU ARE NOT WELL VERSED WITH THE TIMING OF REVOLVERS AND THE NOMENCLATURE OF THE PARTS OF A REVOLVER.

First ensure the revolver is unloaded and no ammunition is present

Next remove the stocks (they're not grips). Make sure to use gun smithing screwdrivers or you'll mess up your screws.

Now, press the trigger slowly and watch the hammer spring. As it moves, near it's terminal point you will see a small hole in the shaft. Put a pin, or paper clip in this hole. This will relieve the pressure on the hammer and allow you to simply pull out the hammer spring and shaft. Do not remove the pin until later. See photo 1

Now, remove the side plate screws, and using a plastic face hammer, bump off the side plate. Do not pry against it with a screwdriver. You WILL DAMAGE THE PLATE. Just tap the frame and the side plate will come right off. If your revolver is equipped with a hammer block safety it will fall out as well. No worries it is easy to see where / how it goes in. The 442 doesn't have one so I won't get into that here.

See photo 6 for all the parts you should now be looking at: the hammer, rebound slide, trigger, and cylinder lock.

Next, using a small screwdriver relieve the tension on the rebound slide spring and carefully pull it out. See photo 3

Now, slowly press the trigger and as the trigger moves out of the way of the double action sear, remove the hammer from it's post.

With the screws out you can now release the cylinder and pull it completely out of the frame. Don't do this until you remove the hammer since the cylinder must be closed to unlock the action and allow the trigger to be pulled. You can pull the cylinder release to the rear to do this but its just easier to leave the cylinder in.

Now, remove the trigger. You will have to carefully move the hand out of its window to do this. Be careful because the trigger lever may fall out. Be sure to understand how it goes into the trigger, before you pull it out. See photo 2

Next, carefully pull out the cylinder lock. Be careful as it is also under spring tension. See photo 5

You now have a mostly empty frame see photo 4

Ok, now that you have all the parts out, use a honing stone to smooth out the rough spots and high spots on all of the contact points of all the parts. You don't want to remove metal, just smooth it out. You will feel a difference between grinding off metal and smoothing it out in your use of the honing stone. DO NOT HONE THE POINTS WHERE THE SINGLE ACTION SEAR NOTCH IN THE HAMMER CONTACTS THE SAME POINT ON THE TRIGGER. THIS CAN RESULT IN PUSH OFF IN SINGLE ACTION MODE.

Once you have smoothed out all of the parts, replace them into the gun in reverse order from that which you removed them.

Replace the cylinder, put in the hammer spring and remove the pin you used to compress the spring.

Now put the side plate back on and replace the screws.

Finally put the stocks back on.

You should feel a difference in the trigger. It should be smoother, but not lighter since we did not replace any springs. 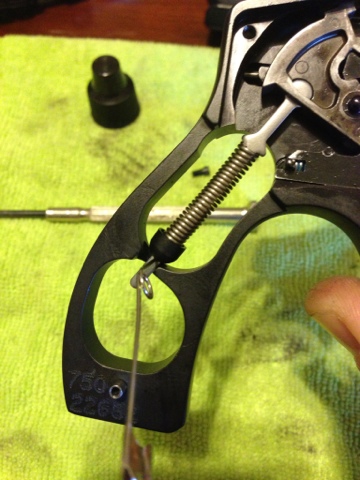 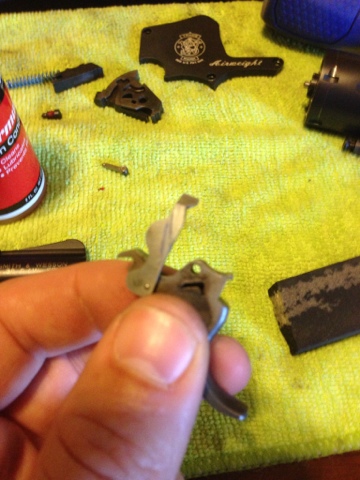 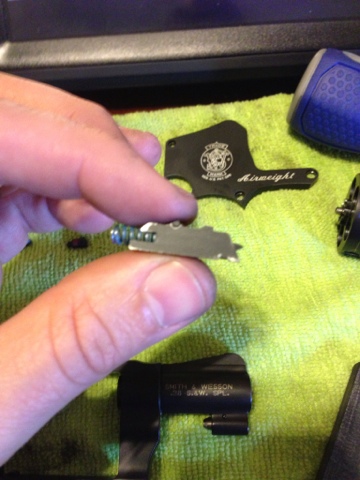 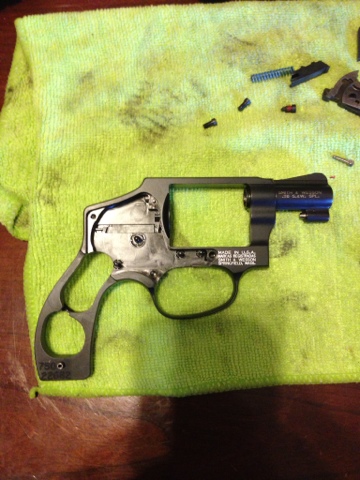 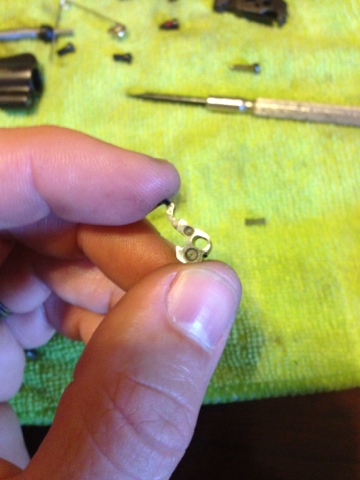 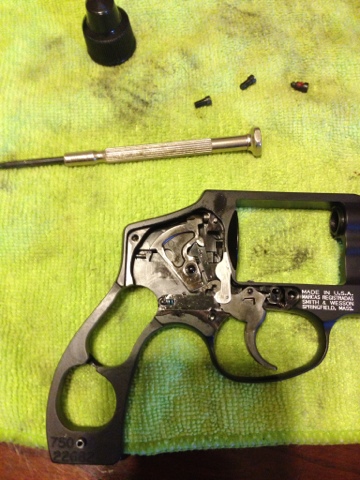 Do You Carry A Badge? Then Carry A Gun

I am amazed by the number of Officers and Deputies in this great nation that when asked if they carry a weapon off duty respond with, "No, when I'm off, I'm off." The next question I ask them is, "Do you carry your badge off duty?" Guess what? Most say, "Yeah, it's in my wallet." Why carry the one without the other? I think my readers are smart enough to realize why having a badge might at times be an advantage. I make no statement as to whether it is right or wrong. I just point out facts.

I understand their statement, and I agree with them as far as taking deliberate police action in an "off duty" status. But what about when we witness a violent felony in an off duty status and we can't intervene because we don't have our weapon? I usually get the theory that "Well, I don't go to dangerous places and I lead a low risk personal life." Bravo Sierra. The world is a dangerous place kiddos and no matter how situationally aware you are, the bad men come out when and where we don't expect them to. Like while waiting in line to pay for a candy bar at the corner store. I would hate to think that a clerk I've known for years got smoked because it was too much trouble to strap on my piece before I left the house. And this is the GOOD scenario. How much worse would it be if WE or a loved one were the one who was killed because we COULDN'T ACT.

True story time. Many years ago, I gave a guy a government rate night in the county hotel for shoplifting. That not being a horrible charge he made bond before the ink was dry on my report. Two days later I was off and had my then baby daughter with me. I ran into the store to get my wife (who is awesome by the way) a Christmas present as that was a few days away. I had my gun in the truck but for whatever stupid reason I left it there and went into the store.

I put my daughter in a cart and we walked around the store looking for a gift. Several minutes into our shopping I turn a corner and come face to face with guess who. He looks at me and smiles. I look at him and smile. I remember him. I move past him and keep my eyes on his hands. Not being one to run away I continue my shopping (stupid, I should have left). I continue down a hardware aisle and at the other end is Mr. Friendly, now with two of his buddies, and they are looking around for cameras. I grabbed a framing hammer and gave them all my best Dirty Harry look as I backed out of the aisle.

I'd had enough now and took my daughter and left.

What if they had been armed and decided to make an issue out of the encounter? There I am with a hammer in a gun fight, WITH MY KID! If that guy wanted me, he had me. To this day, I have never made that mistake again. If you see me, and I am conscious, I have a gun on.

This comes with some sacrifices. I am ALWAYS the designated driver because I am ALWAYS armed which means I don't drink in public. My family and I don't go to certain places that don't allow firearms on private property like amusement parks. After what happened to me in that store all those years ago, I will never be caught without a gun again.

"So Fox, you don't fly or take cruises or anything?" Yes I do those things and of course I can't take guns on a cruise ship. But I can and do use improvised weapons when I am out of the country. I won't get into the hows in this setting so don't ask.

What I want to impress upon you all here is that you have the authority to carry guns as a Law Enforcement Officer in many places where the citizenry cannot, but that doesn't mean they don't.

We all know firearms laws make us safer right? I mean the law says you can't have a gun at a public gathering so no one has one right? C'mon guys. Don't be the one person who can legally carry a gun at a place when someone who doesn't care about the law decides to shoot it up.

I won't drag this out painfully. There are bad guys out there. Many of them will try to settle a score with you if they meet you out and the opportunity presents itself. If they think they can take you and get away with it, they'll try. Wouldn't you?

If you carry a badge, carry a gun. If you want to carry a badge without a gun, the first stop you should make after leaving the house is your Chief or Sheriff's office to turn in your badge.

Stay safe. We need you out there.
Posted by Fox on Point at 1:25 PM